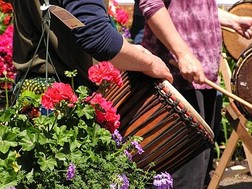 People who hear and see us perform say that we look so happy and seem to be having so much fun. That's because we are!

United by the love and awe that we feel toward West African traditional rhythms, we are life-long students of this rich and complex music, with experience ranging from a few years to many. We humbly seek opportunities to learn from our African teachers every year and then share the gift they give us in this uplifting music.

Each rhythm we play has a specific meaning in West African villages, whether it’s a celebration, accompaniment for work in the fields or signifying an important rite of passage. The rhythms are polyrhythmic – made up of multiple, interlocking patterns of beats and silence. When music is played in West Africa, everyone is involved. There is no audience, only participants! The music is “good” when there is participation and involvement from all. So we invite you to come be inspired and share the joy that is West African drumming.

As the leader of Araba-lon, Grant is dedicated to honoring the traditional music of West Africa by offering performances at local farmers' markets, arts markets and a variety of multi-cultural dance events and celebrations. The Araba-lon group also accompanies Sayon Camara during his local residencies and performances.

As the musical journey unfolds, there will be new sounds and forms and new collaborations, but the circle will always return to the fundamentals - community, celebration and gratitude. 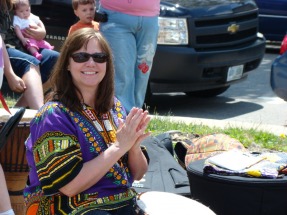 DIANE HOFFMAN - Multi-Instrumentalist
I came from a musical family.  My mother played the piano and my father, self-taught, plays the piano, guitar, accordion and harmonica. I took piano lessons as a kid and currently have a piano, ukulele, acoustic and electric guitars which I play for my own enjoyment.

In 2006, I was introduced to a drum circle, fell in love with the jembe and purchased one.

Arabalon was formed as a spin-off from the monthly regular drummers, and I have been playing not only the jembe but also the larger drums.  I find drumming to be a great musical experience.  Each beat, slap, hit, etc., speak for themselves which relates to a wonderful harmony when combined together.

DEBORAH STETLER- Multi-Instrumentalist, Co-Leader
“Have drum, will travel” has characterized Deb’s studies of West African drumming over the past 10+ years. Soon after accepting a spontaneous invitation to try a drum class in Berlin, Germany, she sought out a second teacher to feed her new obsession. Her travels and drive to learn progressed from Berlin to her native Michigan, where she co-founded Badenya Drum Ensemble with local friends.

After a move to Vermont in 2011, she continued to further her musical education with respected teachers, such as Mamady Keita, Famoudou Konate, Namory Keita, Bolokada Conde, Helen Bond, Dave Kobrenski, Michael Markus, and others in workshops all around the country. The crowning event was a three-week trip to Guinea with current teacher Sayon Camara in December 2013.

The best part about this music? “Finding resonance with people of all ages and walks of life, drumming with different people from all over the world (and meeting them again!), and following my heart to Guinea.” 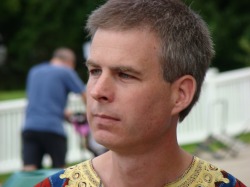 BEN BYNUM - Multi-Instrumentalist
Ben’s first exposure to West African drumming was in High School with a one-day intro class. The music captivated him but he didn’t pursue it.

Over 20 years later the opportunity arose to organize a local drum circle with a drumming friend, which continued for about a year. Grant planted the seed at one of those circles to join his newly formed group. Eventually he did and has never looked back only looking forward to every opportunity to experience the joy of this music.

“Learning to hear and be able to play the tightly woven and complicated rhythms of West Africa has been a long and beautiful journey.” 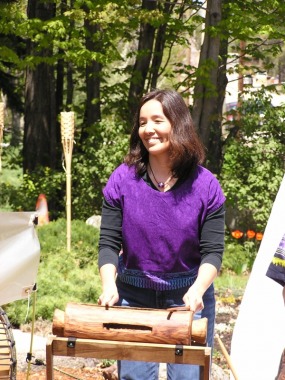 Tracey took her first hand drumming class in 2003 and never looked back.  She studied first in the Gainesville, Florida area with Leon Larson (Baba Leon) and attended workshops with Gordy Ryan, both long-time students of Babatunde Olatunji.  She had the opportunity to perform and record with Baba Leon's group, the Lost Safari Drummers for one year before moving to back to New Hampshire.

Tracey has found New England to be rich with West African Drumming enthusiasts, students and opportunities to study with Master Drummers.

Tracey has been drumming with Arabalon since 2007 and is continually inspired by the group's dedication to keeping the West African traditional rhythms alive in this part of the world and by the shared excitement Arabalon brings to each Wednesday night rehearsal and performance.